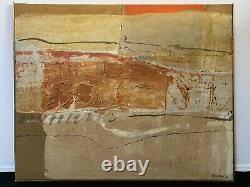 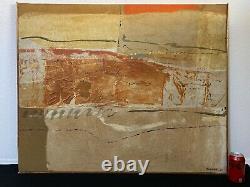 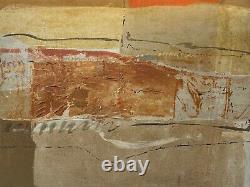 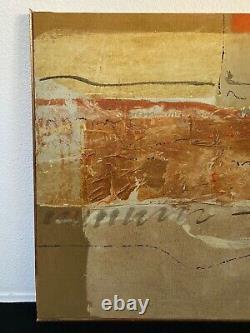 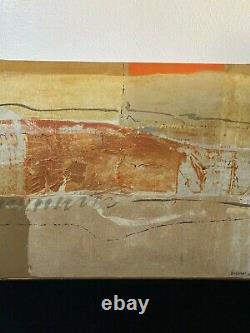 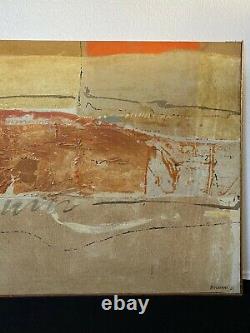 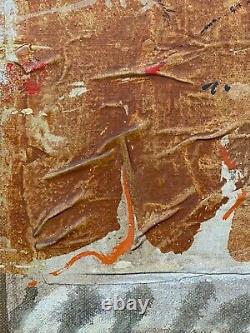 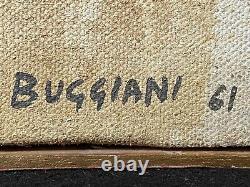 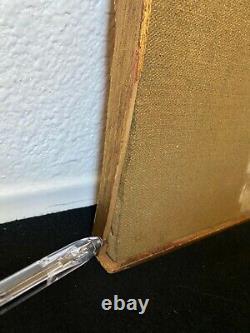 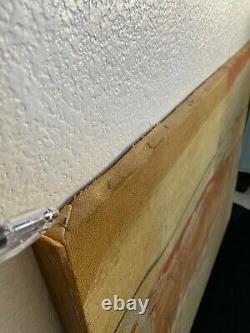 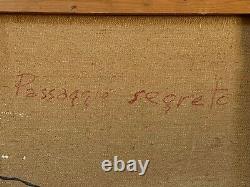 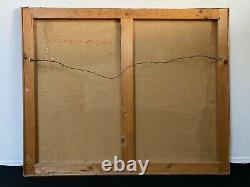 This is a masterful and fascinating Antique Mid Century Modern Italian Abstract Oil Painting on canvas, by revolutionary Italian modernist Paolo Buggiani (1933 -). This work is titled: "Passagio Segreto" on the verso, and depicts a vivid lyrical abstraction of orange, gold, and beige tones in a rhythmic and striking display that exudes energy and movement. Signed and dated: "Buggiani 61" in the lower right corner, this piece was completed very early in his career, and is an exceedingly rare example of the artist's initial creative output. Approximately 32 1/8 x 39 7/8 inches including frame. Actual artwork is approximately 31 7/8 x 39 1/8 inches. Good condition for age, with some light scuffing and edge wear to the original period frame.

The top edge of the wooden frame is missing, but could be easily and inexpensively replaced please see photos. The value of Buggiani's artwork has exponentially increased in recent years, as his contribution to the contemporary art world has become fully appreciated.

Buggiani was closely associated with Keith Haring during his time in New York, and is considered a prototypical founder of the "Street Art" movement. The price of this work is far less than what is available from the esteemed galleries in Italy and New York who represent him. Please check my other listings for more wonderful and unique artworks! Paolo Buggiani was born on the 9th of May 1933 at Castelfiorentino, Florence in the heart of Tuscany. In the early fifties he moved to Rome, where he enriched his study of Contemporary Art.

In 1955, when Buggiani was 22, he participated in the national competition: Incontri della Gioventù where he won first place with the painter Romagnoni. Shortly after, he was invited to 1° Salone d'Estate along with thirty-one other artists of the Roman Avantgard including: Accardi Burri, Cagli Capogrossi, Colla Franchina, Mannucci, Mirko Novelli, Perilli, Rotella Tot, Turcato e Uncini. Buggiani was accepted into the group even though the majority of the artists were 20 years older and already well established.

In 1956 Buggiani had his first one man show at the Schneider gallery of Rome presented by Corrado Cagli. He arrived in Paris in 1958, during his sojourn, Buggiani met Severini, Matta, Victor Brauner and Vilfredo Lam who introduced him to the gallery Glasier-Cordiè where he had a one man show. He moved to New York in 1962 and in 1968 received the Guggenheim Fellowship for Sculpture in America with his experiments using a new method of sculpture called the Vacuum Forming System. Donald Judd, Anthony Smith and Philip Guston were also awarded the Guggenheim Fellowship in 1968. During this period he was also researching the concept of time as it relates to Art.

Returning to Italy in May 1968, he was active both in Rome and Milan. Buggiani's work at the time included. "Fire" (as Performing Art and Installation). "Paintings over Reality" (landscapes photographed through painted crystal).

These images placed into the urban environment brought him popularity as one of the most important members of the Street Art Movement, along with Keith Haring, Richard Hambleton, Ken Hiratsuka, Linus Coraggio, and R. Today Buggiani is regarded as one of the most independent contemporary artists and is internationally recognized for his installations of fire sculptures. Since 1979 he has been sharing his time between New York and the medieval town of Isola Farnese, in Rome. Paolo Buggiani was born in 1933 in Castelfiorentino, in the heart of Tuscany. In the early 1950s he moved to Rome to pursue his study of contemporary art.

In 1955, he participated in the national competition. Where he won first place, along with the painter Romagnoni. Soon after, he was invited to the first. Along with 31 other artists of the Roman Avant-garde.

In 1956, Buggiani had his first one-man show at the Schneider gallery of Rome presented by Corrado Cagli. He moved to New York in 1962 and in 1968 received a Guggenheim Fellowship for his experimental method of sculpture called the Vacuum Forming System.

During this period he was also researching the concept of time as it relates to art. Keith Haring, Paolo Buggiani and co. The true origin of Street Art. This item is in the category "Art\Paintings". The seller is "willsusa_utzeqm" and is located in this country: US.

This item can be shipped to United States.