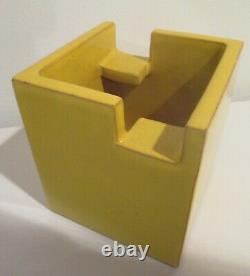 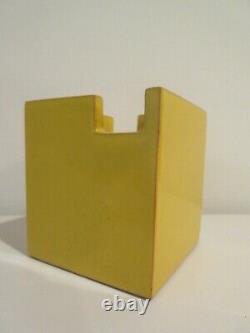 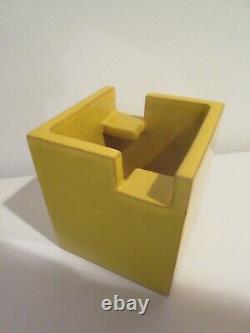 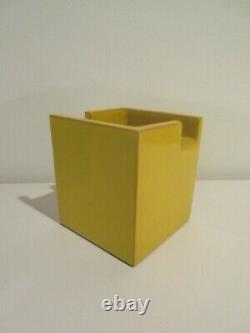 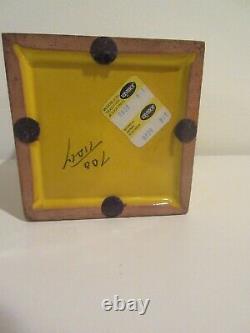 Label affixed to bottom of piece. Approximately 5" W x 5" H x 5 D. Rare cubist geometric vase by Bitossi for Raymor. A nice addition to mid century modern, transitional, or contemporary modern decor. Eames, Danish modern, and mid-century modern furnishings. Raymor was the brand name of an import company and distributor based in America and active from 1941 until 1980. Although it imported most of its stock, it also oversaw the manufacture of a comparatively small quantity of goods in the US. During its lifetime, Raymor worked with many leading American, Italian, and Scandinavian designers and the companies they worked for. The company entity was incorporated as Russel Wright, Inc in 1936 and was liquidated on April 8th 1980. Raymor was built by the American entrepreneur Irving Richards (left, 18th May 1907- 19th November 2003), who was born Irving Rappaport in Manhattan, New York. He became one of the most influential figures in mid-late 20thC design, and was at the cutting edge of popular American tastes during the period. Raymors catchphrase, printed on nearly all of its paper labels (right), was Modern in the Tradition of Good Taste. Richards himself was described as a. By Donald Albrecht, co-curator of the Russel Wright exhibition at the. Cooper Hewitt National Design Museum. He forged strong relationships between designers, manufacturers, retailers, and advertising and PR agencies which resulted in the best of modern design at all levels being brought to the wider American public.

The seller is "charakmodern" and is located in Highland Park, Illinois. This item can be shipped to United States.