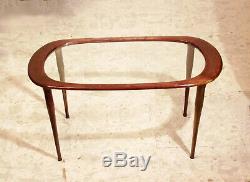 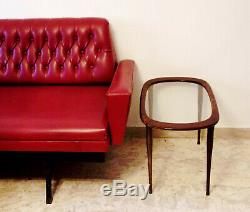 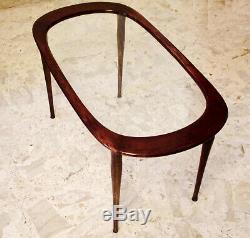 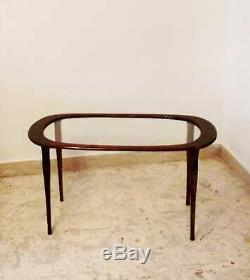 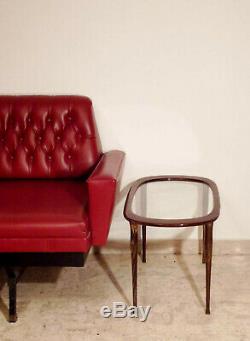 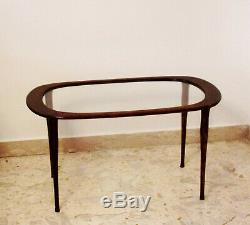 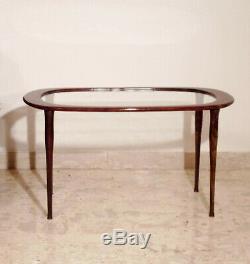 Mid Century Italian Oval Coffee Table Attributed to Cesare Lacca, Italy, 1950s Mahogany & Glass. A Mid Century Modern sculptural coffee or side table in Cesare Lacca's distinct design with an oval re-finished mahogany wood structure and a clear glass tabletop. Dimensions: Length 31.5" (80cm) / Width 16.5" (42cm) / Height 17 (43cm) Material: Lacquered mahogany, glass, brass messing bolts, rubber feet (one of the rubber feet is missing). This table is a vintage item, in good original condition, not restored and preserving a beautiful patina, therefore it might show minor wear consistent with age and use, but it can be considered ready to become a piece in a home. Elegant Italian design from the 1950s.

Designer: Cesare Lacca (Attributed) Period: Mid-Century Modern Place of Origin: Italy Date of Manufacture: 1950s Materials: Lacquered mahogany, glass, brass messing bolts, rubber feet (one of the rubber feet is missing). Dimensions: Length 31.5" (80cm) / Width 16.5" (42cm) / Height 17 (43cm) Condition: I n good original condition, not restored and preserving a beautiful patina. Compared to current "disposable" productions, the attention to detail and the quality of the materials used in the 1950s were evidently superior. Objects like these were carefully thought out, designed and built to last a long time and possibly also to be repaired, as well as being an excellent example of the Italian style in the decorative arts!! You must return an item in the same condition as it was received, not altered in any way. Born in Naples in 1929, Italian architect-designer Cesare Lacca created modernist furniture and metalwork throughout the 1950s. Though details of his personal life and professional training remain lost to history, there are sufficient surviving primary sources that document his many elegant designs in brasswork for which he is best know and which fetch high prices from collectors. Like many Italian designers in the 20th century, Lacca moved to Milan after World War II to launch his career. Before he was even 21 years old, his work was selected by a group of American curators for inclusion in the landmark exhibition Italy at Work: Her Renaissance in Design Today that toured 12 US museums between 1950 and 1953the first major exhibition of Italian design outside of Italy. The exhibition showcased the best and brightest of Italian designers who had embraced modernist principles and rejuvenated traditional Italian crafts, like Carlo Mollino , Franco Albini, and Gio Ponti In the exhibition catalogue, curator Meyric R. Rogers spotlights Lacca's expert achievements in brass, noting the variety and quality of his creations, which place him high among the architect-designers leading the current [Modernist] movement. " Rogers adds, "The quality of his work... Provide[s] all the decorative effectiveness needed without strain or exaggeration. Lacca designed a great many tea carts and serving trolleys in his careerwhich make up a large proportion of what is available on the vintage market todayas well as magazine racks and coffee tables. Laccas most iconic tea cart was manufactured by Italian brand Cassina and features sculpted beech, cedar, teak, or walnut with brass details, a glass tabletop, and a removable glass tray. Lacca also designed high-backed lounge chairs, which were regularly featured in Arredoluce advertisements for Angelo Lellis lighting. Incidentally, Laccas lighting designsat least one of which was on display at the 1950 Brooklyn Museum exhibition are difficult to source and often sell well above estimated prices at art auctions. Almost all of Laccas known designs were created in the 1950s, and unfortunately we do not know how his career developed from the 1960s. Today, Cesare Lacca is appreciated for his contribution to the Italian design identity; his ability to fashion brass into the Italian postwar design conversation; and his timeless, highly sought-after serving trolleys. Italy is one of the leading design country in the world, with its rich creative output in a wide range of fields including the arts, fashion, lighting and architecture. Design from Italy, be it a modernist table lamp from the 1950s or a space-age plastic chair from the 1960s, displays a confident sensual attraction, indeed Italian creations can be found in museum collections such as the design collections of MoMA, The Metropolitan Museum of Art, the Victoria and Albert Museum, Centre Pompidou, the Vitra Design Museum and ADI. Italy is recognized as being a worldwide trendsetter and leader in design, food and fashion: the architect Luigi Caccia Dominioni claims that "Quite simply, we are the best" and that "We have more imagination, more culture, and are better mediators between the past and the future". Modern, elegant and truly timeless, from the perfect cup of moka, risotto allo zafferano to luxury cars. Italian design focuses on quality materials, great styling and beauty and it shows in everything they create. During the second world war a big part of the Italian construction legacy had been destroyed, so it was important to find new ideas to reconstruct the country: this was an interesting challenge for designers and architects who were called to renew Italian dwelling places in a technical and functional way. In 1940's Italy, a new wave of designers was creating furniture and lighting totally unconfined in their flamboyant use of silhouettes and their wild application of jigsaw rhomboids Their wittiness and drop-dead sophistication...

Milan was at the center of this tremendous creative energy and was the venue of choice for defining events like the Milan Triennale exhibitions and later on the Salone del Mobile. Italy was able to merge art with design and craftsmanship with industry in a way nobody had done before. This occurred thanks to a very peculiar industrial network where larger companies would often work hand in hand with architects, artists and family size enterprises located in the same industrial districts. In the 50s George Nelson identified three currents in modern design: the biomorphic, the machine look and the handcrafted look but none of these could fully describe Italian design as it was so diverse that it could not fit in a single category. In a way, it was already at that time postmodern.

On one hand you had "Rationalist" designers such as Franco Albini who focused on function and on the other you had architects and designer such as Gio' Ponti, Ico Parisi and Piero Fornasetti who added to functional pieces a poetic interpretation and dynamism. In 1950's industrial objects became a symbol of this new renaissance period; Italy suddenly found out that modernity means welfare, comfort and a best type quality of life. So next to home appliances we could find furniture, lamps, a vaste range of objects for home and free time, radio sets and television sets that gave life to a typical 50's gay image. In the same years the new furniture's shapes for serial industrial production had an important role. Young rationalist architects could finally put in practice their training knowledge. Some important names of the period to mention are Franco Albini, Ignazio Gardella, Luigi Caccia Dominioni, Vico Magistretti, Ettore Sottsass, Marco Zanuso, Achille and Piergiacomo Castiglioni and the BBPR group (Banfi, Belgiojoso, Peressutti, Rogers). In the lighting sector there were two distinct types of manufactures: Murano based companies (Venini, Barovier & Toso and Mazzega) who mainly used blown glass in their works and Milan based companies (Fontana Arte, Arteluce, Arredoluce and Stilnovo) who employed flat glass and brass.

The latter collaborated with well know designers such as Angelo Lelli, Gino Sarfatti, Gio Ponti, Max Ingrand who brought their designs to the attention of the world. Italian design exploded during the 50s becoming well known internationally, but it was only in the 60s that Italians became the trend setters in lighting and furniture design. 1960 was after all the year of La Dolce Vita and during this decade and the 1970's Salone del Mobile became the most important industry event, alog with other instruments for Italian design promotion such as the Compasso d'oro prize and exhibitions like the Triennale in Milan. There was a high level of experimentation with companies like Cassina, Gavina, Zanotta supporting the development of young designers using new materials, techniques and shapes.

The Italian design excitement and sperimentation found its peak in 60's, when a great number of ordinary objects were produced. There was a rapidly increasing national and international market demand, people usually bought objects more for their names then for their real worth. In these years other designers had a big importance: Mario Bellini, Vico Magistretti, Gae Aulenti, Angelo Mangiarotti, Enzo Mari, Rodolfo Bonetto, Marco Zanuso.

By the endof the 60s, the economic miracle ended, social tensions began and this had a strong effect on the industry with the rise of radical design. Ideologies split into two different directions: Some designers further evolved the more rational shapes of the early 60s, focusing on larger consumption whilst keeping quality and sophistication in mind. As a result of this, the use of polished bright steel became more common. Other designers instead focused on Anti-Design, choosing to model their designs on intellectual statements and experimental concepts with limited quantities manufactured. In the second half of the 70's the'post-modern', or'neo-modern' became the most significant movement in Italy, the new phenomenon emerged thanks to vanguard designers (Branzi, Mendini, Deganello, De Lucchi, Sottsass) and above all thanks to Alchimia group (founded in 1976 by Alessandro Guerriero) and Memphis group producing unusual objects which didn't belong to any tendency.