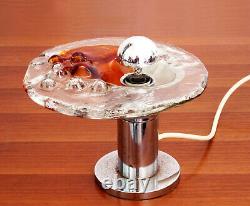 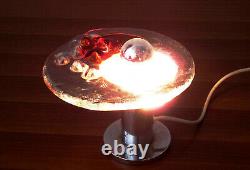 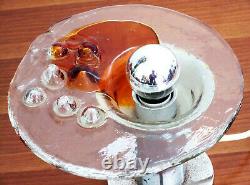 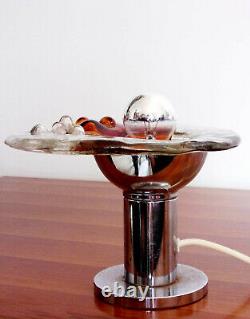 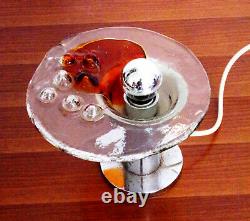 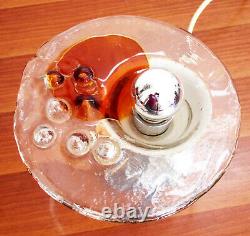 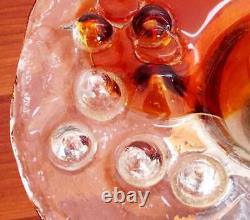 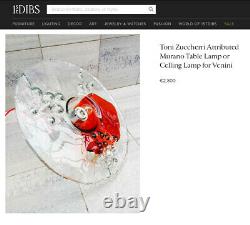 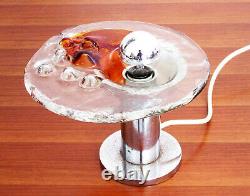 Toni Zuccherri attributed Murano Table Lamp for Venini, Italy, 1970s. Rare Italian Table Lamp designed by Toni Zuccheri and manufactured by Venini in the 1970s. With this light you make a clear statement in your interior design, a real eye-catcher even unlit. Table lamp in clear and amber Murano glass and chromed metal. In working order, very good vintage condition with wear consistent with age and use, glass without defects.

Condition: Working / Excellent Vintage Condition /. 13 cm / 5 - Max. It is possible to find a few rare examples of lamps like this for sale in galleries specialized in the sale of design objects at a price of several thousand euros. Toni Zuccheri was an architect, painter and designer. He was born in San Vito al Tagliamento, in the north of Italy in 1936.

His father was the painter Luigi Zuccheri, a painter of animals. After World War II in 1945, the family moved to Venice, some 80 km/ 50 mi away from San Vito al Tagliamento. In Venice he studied at the Università Iuav di Venezia, the Faculty of Architecture in Venice and got to know important artists there such as Ignazio Gardella, Giorgio De Chirico, Carlo Scarpa, Ludovico Belgioioso, Vanni Scheiwiller, Giorgio Bassani, Bruno Zevi, Elio Zorzi, Mario Soldati, Franco Albini, Giuseppe Samonà, Carlo Della Corte and others. He took an interest in glass, and since his early twenties in the 60s he worked at Venini were he invented and reinvented working techniques, shapes and colours. His first glass works for the company are, due to the family tradition, animals made of poly-chrome glass. He personally produced prototypes, following the artisans in carrying out the work. The result was complex works, unique pieces characterised by a direct and evoked naturalness. Italy is one of the leading design country in the world, with its rich creative output in a wide range of fields including the arts, fashion, lighting and architecture. Design from Italy, be it a modernist table lamp from the 1950s or a space-age plastic chair from the 1960s, displays a confident sensual attraction, indeed Italian creations can be found in museum collections such as the design collections of MoMA, The Metropolitan Museum of Art, the Victoria and Albert Museum, Centre Pompidou, the Vitra Design Museum and ADI. Italy is recognized as being a worldwide trendsetter and leader in design, food and fashion: the architect Luigi Caccia Dominioni claims that "Quite simply, we are the best" and that "We have more imagination, more culture, and are better mediators between the past and the future".

During the second world war a big part of the Italian construction legacy had been destroyed, so it was important to find new ideas to reconstruct the country: this was an interesting challenge for designers and architects who were called to renew Italian dwelling places in a technical and functional way. In 1940's Italy, a new wave of designers was creating furniture and lighting totally unconfined in their flamboyant use of silhouettes and their wild application of jigsaw rhomboids Their wittiness and drop-dead sophistication... Milan was at the center of this tremendous creative energy and was the venue of choice for defining events like the Milan Triennale exhibitions and later on the Salone del Mobile. Italy was able to merge art with design and craftsmanship with industry in a way nobody had done before. This occurred thanks to a very peculiar industrial network where larger companies would often work hand in hand with architects, artists and family size enterprises located in the same industrial districts.

In the 50s George Nelson identified three currents in modern design: the biomorphic, the machine look and the handcrafted look but none of these could fully describe Italian design as it was so diverse that it could not fit in a single category. In a way, it was already at that time postmodern.

Italian design exploded during the 50s becoming well known internationally, but it was only in the 60s that Italians became the trend setters in lighting and furniture design. 1960 was after all the year of La Dolce Vita and during this decade and the 1970's Salone del Mobile became the most important industry event, alog with other instruments for Italian design promotion such as the Compasso d'oro prize and exhibitions like the Triennale in Milan. There was a high level of experimentation with companies like Cassina, Gavina, Zanotta supporting the development of young designers using new materials, techniques and shapes.

Shapes became less flamboyant in the mainstream design but remained very vivid in the work of designers inspired by the pop art and plastic became a widely used material even for high end products. Some important names of the period to mention are Franco Albini, Ignazio Gardella, Luigi Caccia Dminioni, Vico Magistretti, Ettore Sottsass, Marco Zanuso, Achille and Piergiacomo Castiglioni and the BBPR group (Banfi, Belgiojoso, Peressutti, Rogers). The Italian design excitement and sperimentation found its peak in 60's, when a great number of ordinary objects were produced. There was a rapidly increasing national and international market demand, people usually bought objects more for their names then for their real worth. In these years other designers had a big importance: Mario Bellini, Vico Magistretti, Gae Aulenti, Angelo Mangiarotti, Enzo Mari, Rodolfo Bonetto, Marco Zanuso.

By the endof the 60s, the economic miracle ended, social tensions began and this had a strong effect on the industry with the rise of radical design. Ideologies split into two different directions: Some designers further evolved the more rational shapes of the early 60s, focusing on larger consumption whilst keeping quality and sophistication in mind.

As a result of this, the use of polished bright steel became more common. Other designers instead focused on Anti-Design, choosing to model their designs on intellectual statements and experimental concepts with limited quantities manufactured. In the second half of the 70's the'post-modern', or'neo-modern' became the most significant movement in Italy, the new phenomenon emerged thanks to vanguard designers (Branzi, Mendini, Deganello, De Lucchi, Sottsass) and above all thanks to Alchimia group (founded in 1976 by Alessandro Guerriero) and Memphis group producing unusual objects which didn't belong to any tendency. The style was extremely provokative and kitsch and it became in a few time the guiding style of the new Italian design. You must return an item in the same condition as it was received, not altered in any way.

The seller is "spatheia" and is located in Milano. This item can be shipped worldwide.